Was back in Dingle visiting St. James' church again in late August this year.  We'd just walked over Conor Pass, eaten some decent chippy food, and pitched our tent, when we discovered that Irish dub reggae band Avatar would be playing at St. James in the evening:

Dub reggae (a kind of mix of reggae, without vocals, and jazz) isn't really my genre, but I quite enjoyed Avatar whose songs seemed to be 10 minutes plus giving things a kind of Prog effect. Think it was mentioned that the guitarist and American saxophone player below were guest musicians with the band (both excellent): 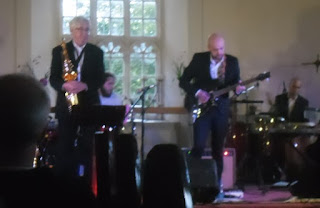 Had first visited St. James church five years ago when we had seen local Irish bagpipe player, Eoin Duignan, so it was nice to see a mural of him on Dingle seafront: 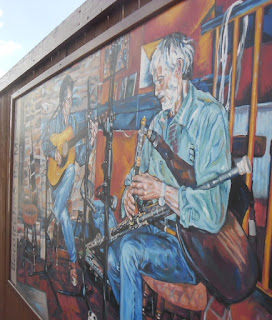 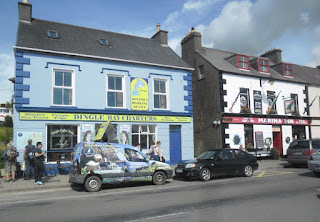 Think Eoin Duignan was playing at St. James the day after Avatar so we should've really spent another night in Dingle, but unfortunately, we didn't.
Posted by Pat Papertown 2 at 09:42